Determining if an element of pay is Pensionable

There are a number of mechanisms available to assist in determining if an element of pay is pensionable or not. The facilities below, also provide alternative, optional features for scenarios with varying degrees of complexity.

This can range from a single element of pay (e.g. Basic Pay), which is pensionable for all schemes which have been associated with the employee, to scenarios where an individual may have multiple roles and multiple schemes.

This document will describe the alternative mechanisms available, and suggest scenarios for when each mechanism may be more suitable.

(Note: In the following explanation, the term Contract is used to describe an active Employment History Record. This can also be referred to as an Activity, Job or Role).

This is the starting point for all elements of Pay (and Deductions).

In Controls, the Pension check box indicates if the pay element is pensionable or not. 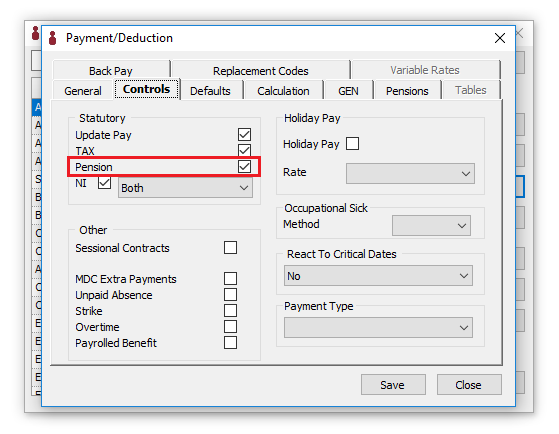 If this box is ticked, then the Pensions tab will be made active. The user may then further refine this by selecting specific Schemes. 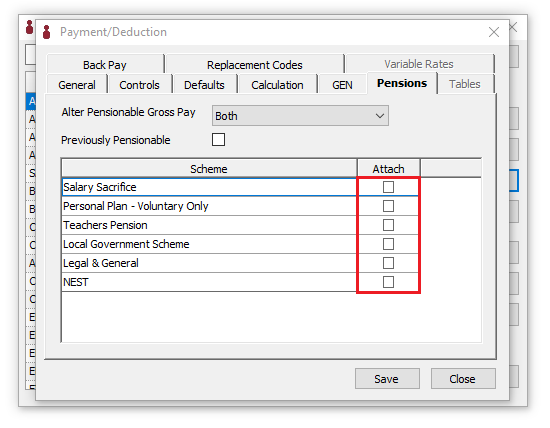 Note: Although this tab is only available if the pay element is described as pensionable, if none of the schemes have been ticked, it is assumed that all schemes are pensionable.

This process describes a global rule, which is the starting point for all employees.

At this stage, (Note: without any further information described for a particular employee), this rule applies to all employees.

It should be noted that even if all schemes are be ticked, only the Pension Schemes that are associated with the employee’s record and have an Active status, will be considered.

If an employee is not associated with any active schemes, then no contributions will be calculated, (Note: even if they are being paid a pay element which is considered as pensionable).

This can be found in HR Record > Payroll Details > Pensions. 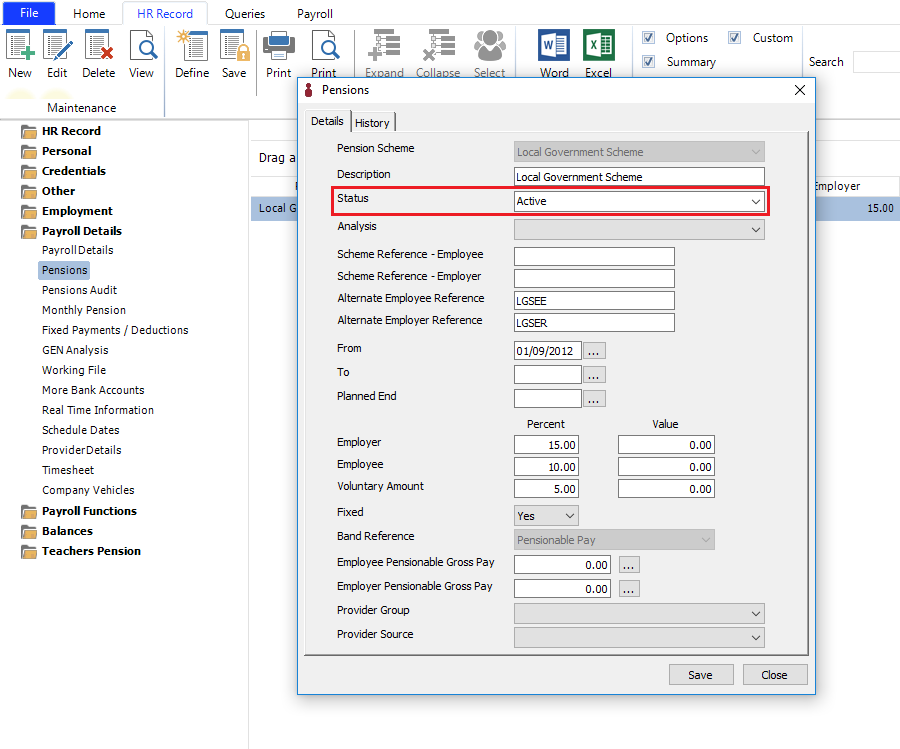 For the majority of scenarios where an employee has a single contract and one Pension Scheme, the above settings should be adequate to enable the accurate calculation of contributions for a variety of pay elements, such as Basic Pay, Overtime, Bonus, etc..

If an employee has multiple contracts and multiple active Pension Schemes, then further mechanisms are required to enable a user to associate certain scheme(s), with certain contract(s), in order to avoid contributions being calculated for all schemes, for all contracts.

The following options are available: 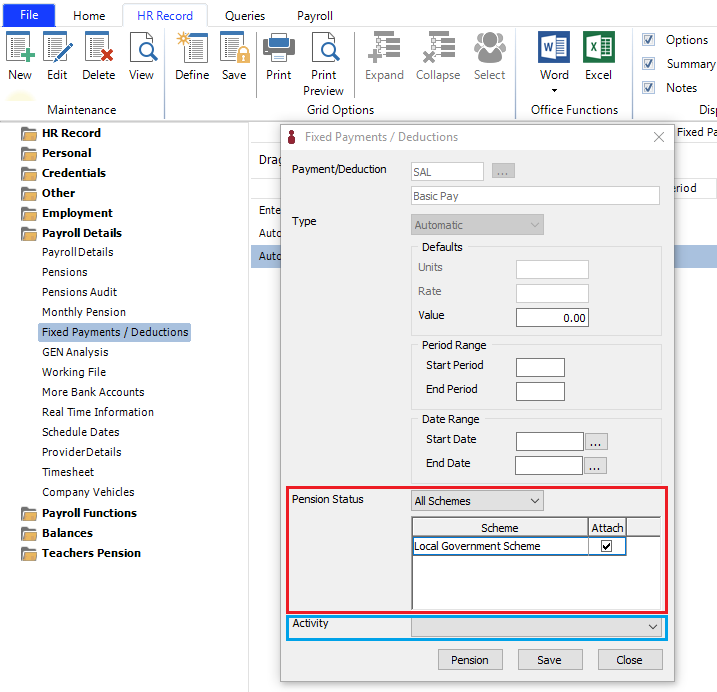 If an employee has multiple contracts, then typically a Basic Pay element is required in the payroll module for each contract. This is in order to describe the individual salaries on a payslip, rather than a global salary for the employee.

Multiple Basic Pay entries will be required in recurring payments (Note: inside red box), and each will reference a specific activity, (Note: inside blue box).

Here, you may also associate a specific scheme(s), defined against the employee (See Employee Pension Scheme Record above). You can additionally modify the global rule (See Pay Element Definition above), but only for the selected contract, for the currently highlighted employee.

In the above example, selecting  an Activity, enables Basic Pay to be calculated from the salary of the contract only, rather than the accumulated salaries for all contracts.

It is anticipated that Pension Status will be set as Selected Schemes, and will be ticked and used in association with this payment.

(Note: Only Active schemes that are already associated with the employee will be listed here, rather than all schemes which have been defined for use in the system).

Payment/Deduction may have been defined as Pensionable (Note: using features displayed in Pay Element Definition above). However, the settings here may override this definition.

Basic Pay may have been defined as Not Pensionable, but here it may be selected as Pensionable. In this case, contributions will be calculated.

Other alternative settings for Pension Status are as follows:

This passes the decision making process, back to the main Payment/Deduction definition described at the beginning of this document. This infers that there are no Employee Specific Rules and the Standard Definition Rules should be applied.

If an employee is attached to a number of active schemes, the Payment/Deduction definition may still determine that contributions should be calculated for some schemes, but not for others.

This is a definitive statement that, irrelevant of the main Payment/Deduction definition, All Schemes should be calculated for the selected recurring payment.

Again, only Active schemes associated with the employee will be considered.

The main Payment/Deduction definition will not be considered any further.

If the pay element Basic Pay has been described as Not Pensionable, but this screen describes that All Schemes should be used, then contributions will be calculated and deducted from the employee’s pay.

This is a definitive statement that, irrelevant of the main Payment/Deduction definition, No Schemes should be calculated for the selected recurring payment.

Again, only Active schemes associated with the employee will be considered.

The main Payment/Deduction definition will not be considered any further.

If the pay element Basic Pay has been described as Pensionable, but this screen describes that No Schemes should be used, then contributions will not be calculated for any scheme.

If an employee has multiple contracts, and is only ever paid the Basic Pay for each element in each pay period, then the above mechanism is suitable.

However, some scenarios may not accommodate this mechanism. If an employee can also be paid overtime for one or more of their roles, this mechanism is not appropriate as it does not describe what to do for the Overtime element(s), only Basic Pay.

You can create a Fixed Payment/Deduction entry for all possible pay elements which may be used for the employees. Here, Type must be Select From to prevent it from dropped into the Working File for the current pay period, (Note: this tends to be unmanageable).

Typically, there will be one pay element described for Overtime, so the employee may have multiple transactions for the same element, but each will be associated with a particular contract.

This will enable the system to calculate the appropriate rate of pay for the contract.

But we now need to also know which schemes are associated with each contract.

For Example: An employee may have the following Overtime transactions:

In this scenario, we need an alternative mechanism to the one described for Fixed Payments/Deductions.

This is an optional facility and is made available by the following settings in System Module Definitions: 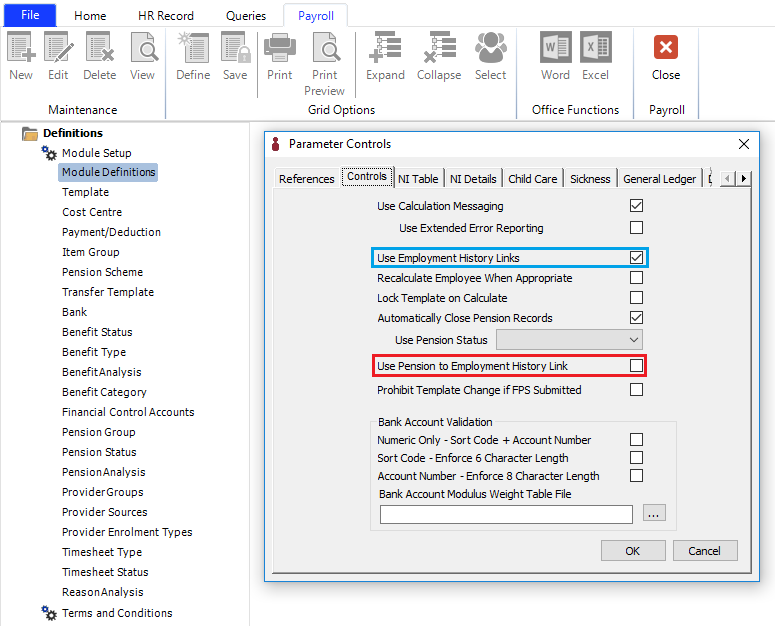 The Use Employment History Link option, (Note: inside blue box) should be used to enable Basic Pay to be calculated from the salaries of a role, rather than the global salary of an employee. This still requires the Fixed Payment/Deduction described above, to be used to associate each Basic Pay element with the correct Contract. 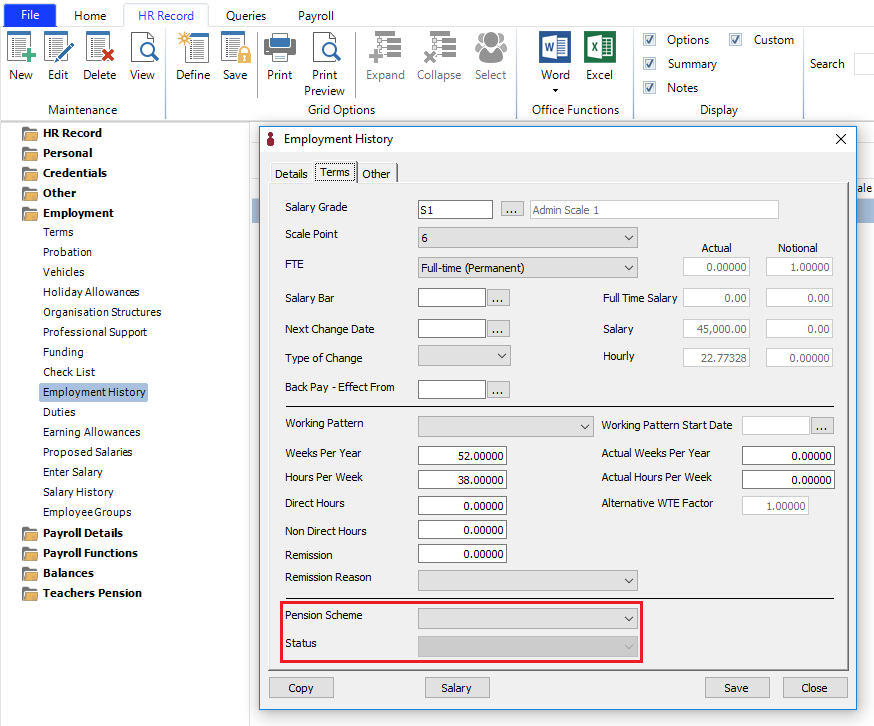 (Note: If Use Pension to Employment History Link (Note: See above), is not ticked, then the Pension Scheme and Status data items will not be visible on this screen).

This has now associated a specific Pension Scheme with the Contract definitions, and in addition, defines the current contribution status.

Note: This is where an employee may opt out of contributions for one contract, whilst opting in on the same scheme for another contract).

If the status assigned here is any setting other than Active, this is a definitive statement that contributions should not be calculated, even if the pay element is Pensionable. This overrides the main Payment/Deduction definition described in Pay Element Definition (Note: See above). This applies to all pay elements associated with the Employment History Record.

A pay element may be associated with an Employment History Record by a few mechanisms. Basic Pay elements will typically be assigned using the Activity association, described in HR Record – Fixed Payments/Deductions (Note: See above).

Temporary Payments however, such as Overtime will be assigned when the transaction is captured, such as by Working File Input, (Note: See below). 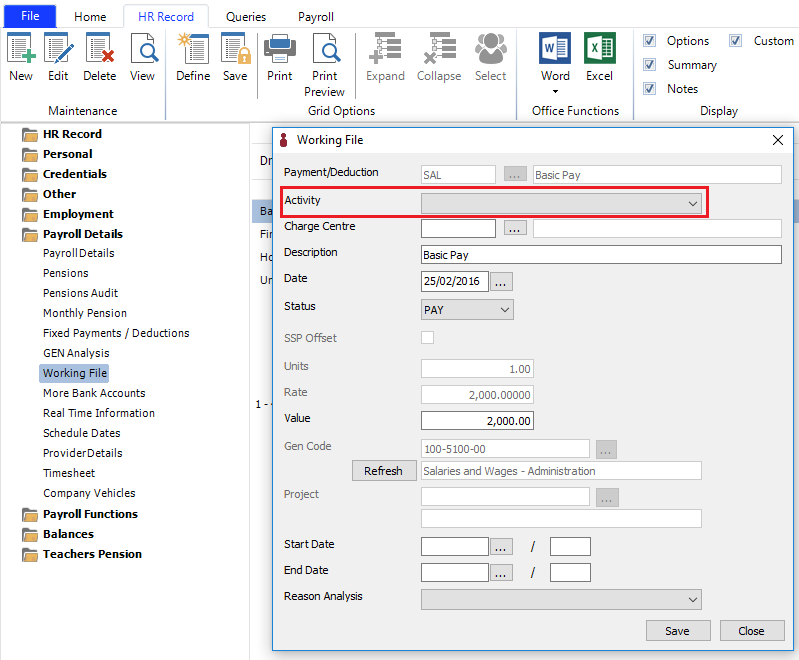 Alternative forms of Data Capture for the Working File, such as imports from spreadsheets or data captured and authorised via the Self Service functionality, can also describe the Activity (Contract) to which it was associated.

This enables a number of defaults to be provided, such as the correct Rate Of Pay and the appropriate Cost Centre to be used for Financial Analysis of the transaction.

This association now also describes the Pension Scheme to which the transaction is linked, and the Status of Contribution Calculations – Active or otherwise.

Note: Whereas the Fixed Payments association with a Scheme, accommodates the selected Pay Element only, the association of a Scheme with an Employment History Record, facilitates any Pay Element)). 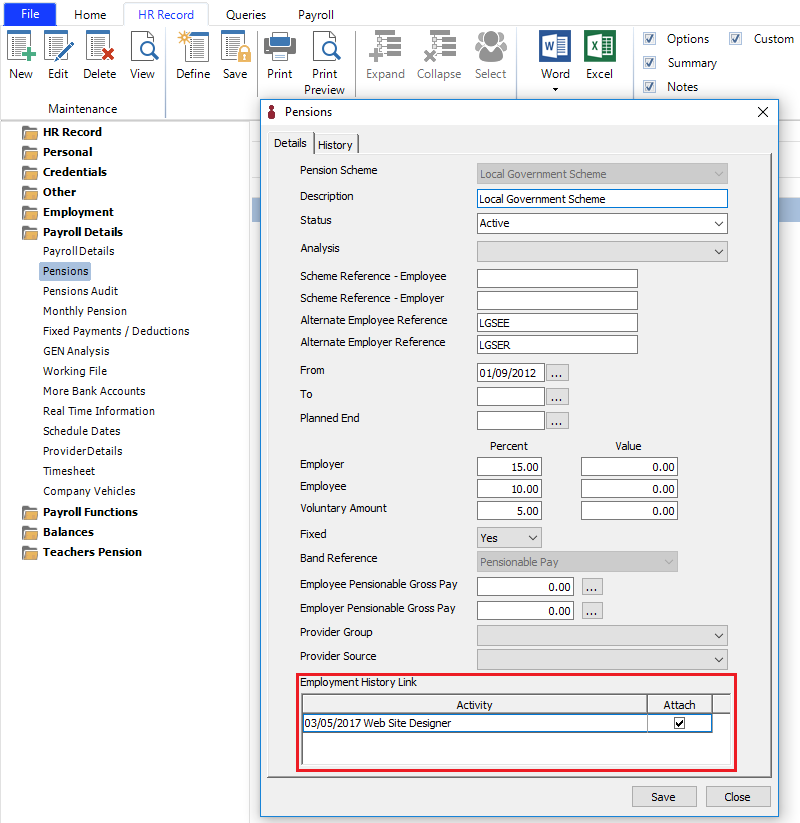 This is an alternative mechanism of associating an Employment History Record with an employee’s Pension Scheme definition.

The two main issues we are attempting to resolve with these mechanisms are:

This is why, even though a contract may be associated with an active Pension Scheme and the status on the contract definition is Active contributions, the system still has to consult the other screens (Note: primarily Pay Element Definitions, see above), to determine if the pay element is pensionable.

In order to facilitate the above, more complex and exceptional circumstance, whilst also easily accommodating the standard employee with only one contract user, consider the following:

Enter your email address and we will send you a password reset email.
Login to Your Account